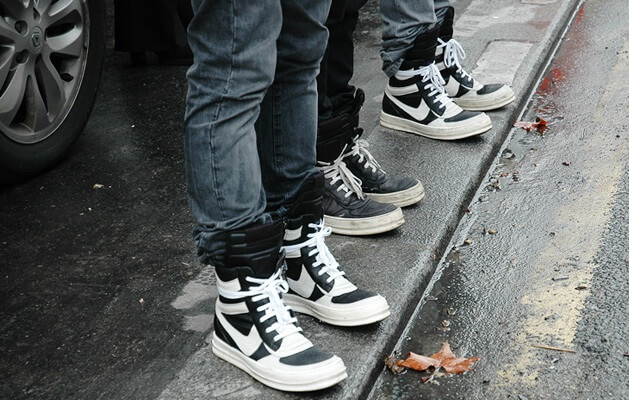 Fitness is one of Rick Owens’ many sources of inspiration. When asked how living in Paris differed from his past apartment in Los Angeles, Rick listed the biggest change as his walk to the gym.

Earlier in 2013, Owens decided to add running to his exercise regiment but found that none of his current footwear was agreeable to the task, “I can’t wear my big chunky basketball shoes…I’d look like a dinosaur” he says.

He contacted athletic companies, and using Adidas’ knowledge as a design solution to his athletic inexperience, he developed his own running shoes.

Many brands develop fast fashion attempting to stay on the cusp of the style wave and serve the masses’ evolving tastes, however Rick Owens’ creations are fundamentally designed for his own use.

Much of Rick Owens footwear is both queer and familiar. His cap-toe sneakers “Ramones“ have abnormal proportions but are an unmistakable homage to the first and perhaps most famous sneakers–the Converse All-Stars.

Perhaps the resemblance was a bit too close, Nike sent a cease and desist in 2008 sparking a redesign of the popular shoe now known as “Geobaskets“.

Rick Owens walks a fine line; by putting a personal spin on established designs he creates footwear that is unique, yet versatile.

These shoes, as with most Rick Owens apparel and footwear, have long been produced by Olmar and Mirta in Modena, Italy.

They have an iconic vulcanized rubber sole found on most Rick Owens sneakers, identifiable by a serrated outsole and a singly ridged 270 degree stitched midsole that reaches far up the toebox.

This sole lends much to the shoe’s appearance, durability, and heft.

Geobaskets have a prominent cushioned leather tongue that stands well above the shoe’s collar.

They have significant structuring, allowing the leather to hold its shape long after the soles have worn.

The perforated, extended toebox is designed not to crease like one may find in leather boots–instead Rick Owens constructed padded folds at the intersection of the tongue and the toebox which give when worn.

The shoe’s inner side sports a heavy chrome YKK zipper.

Although Geobaskets can be found in many different leathers, the most popular versions are made with a soft calf leather, inside and out.

Although the shoes share a similar silhouette, there were many changes to the initial design after the “Dunks” were discontinued.

The Dunks were first made with a check-mark shaped swoop on their sides, an homage to Nike, whereas the post-’10 sneakers have an inlaid triangle that resembles the face of a mountain or pyramid.

The Dunks were made with asymmetric curved zebra stripes below the collar, whereas the Geobaskets have a channel-quilted padded collar that lies parallel to the sole.

Originals have an isolated perforated toecap stitched on the toebox which resembles a Nike Air Force 1, whereas the modern version has a solid perforated toebox similar in shape to a leather boot.

The Dunks also have the vamp stitched over the toebox, while the Geos have a blucher style that extends the appearance of the eyelet tab from the sides down to the sole.

Most Geobaskets share a similar design, while others like Cargo Baskets have unique characteristics such as lace-up thigh-high construction with large leather pockets, and Turbo Baskets come with an enveloping leather hood that hides the shoe’s upper. 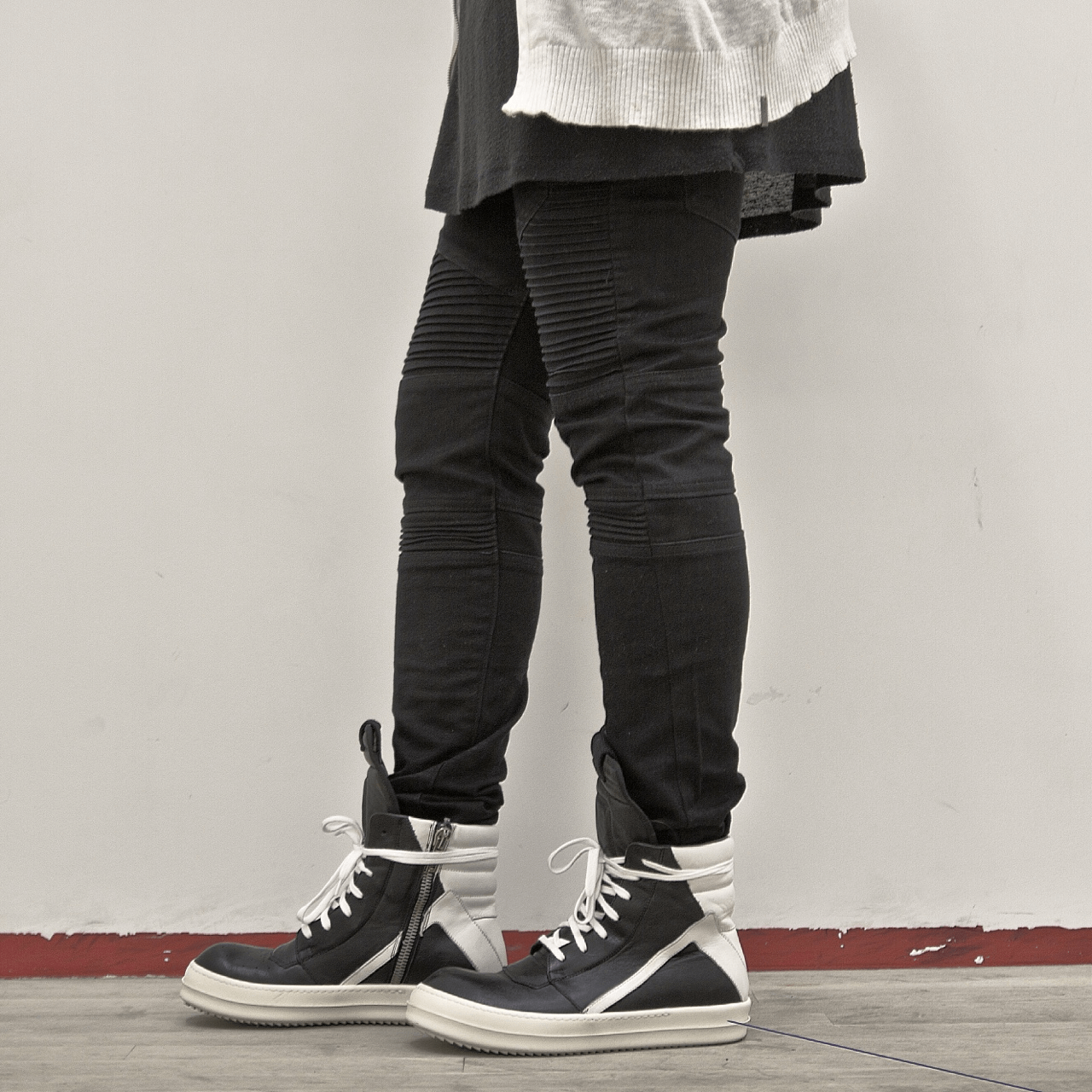 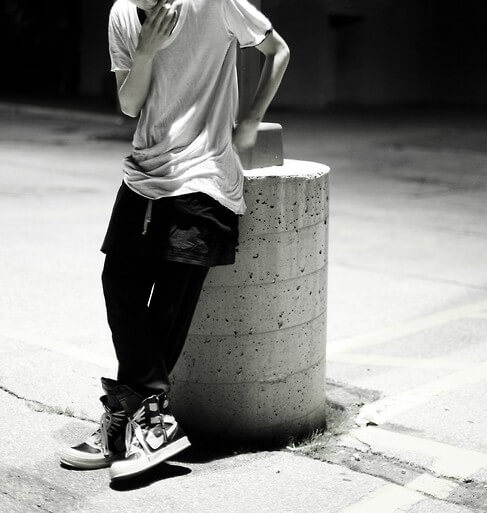 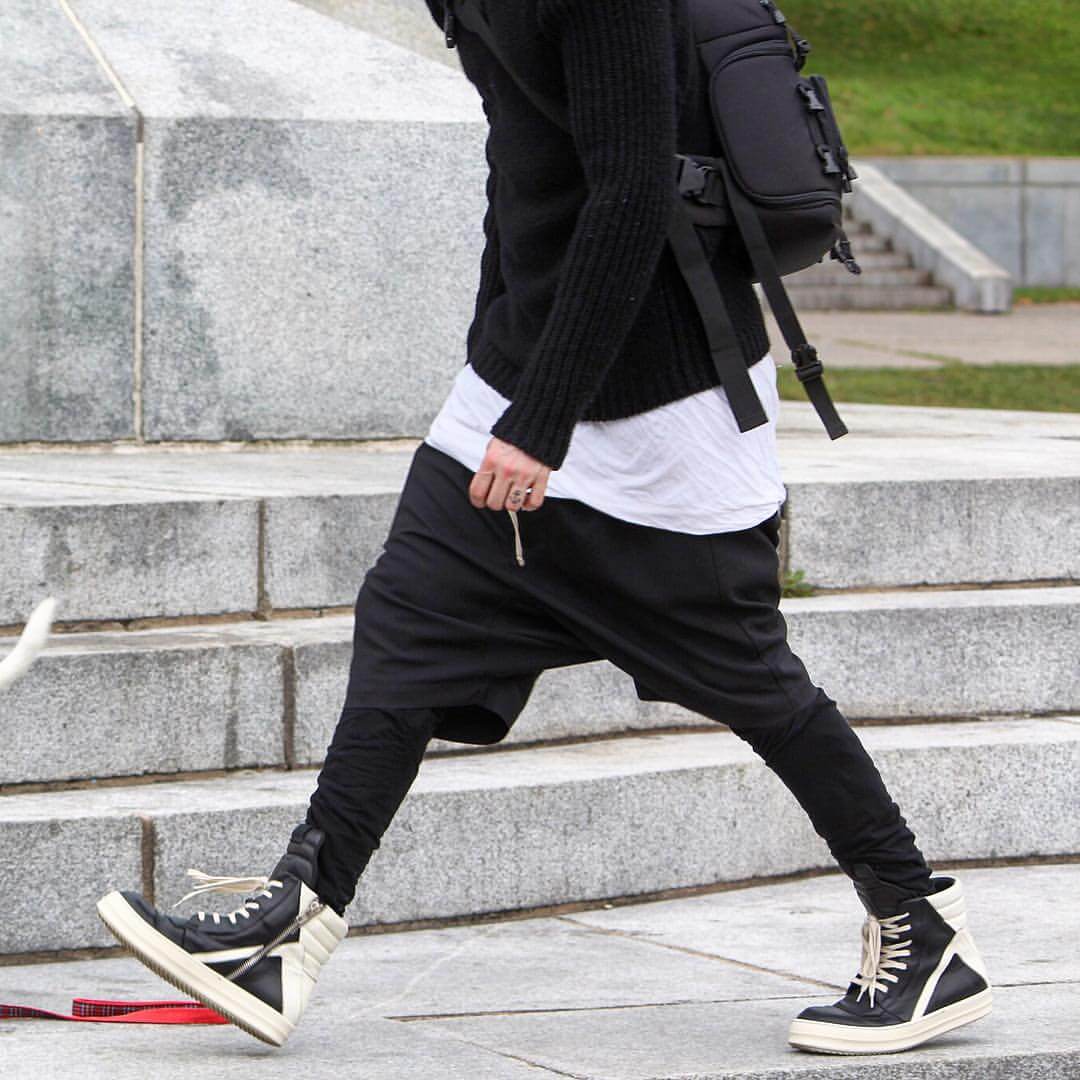 Like the Geos, Rick Owens Ramones have a tall tiered midsole and shark-tooth outsole.

The shoe is clearly inspired by Converse, however Ramones differ in many key ways. Unlike Converse, the toe cap material is calf instead of rubber.

Like Converse, the shoe comes in both low and high versions and sports eyelet vents on the inner side.

Ramones Highs have an extended tongue, while the Lows have a traditional tongue level with the shoe’s profile.

One should expect similar quality from the DRKSHDW variants which are built in the same factory in Italy.

An important distinction is that unlike the name-brand line DRKSHDW shoes are composed of more affordable upper materials such as canvas and neoprene.

The High Ramones sport eight pairs of eyelets, the Low has six pairs.

The High has a YKK zipper on the inner side of the shoe, the Low is lace-up only.

Through the years, Ramones have come in unique designs such as laceless slip-ons, padded thigh-high boots, leather “sock” boots that are half sneaker half leather pant, and one style is designed with a metallic finish and a huge geometric tongue that resembles a shinguard. 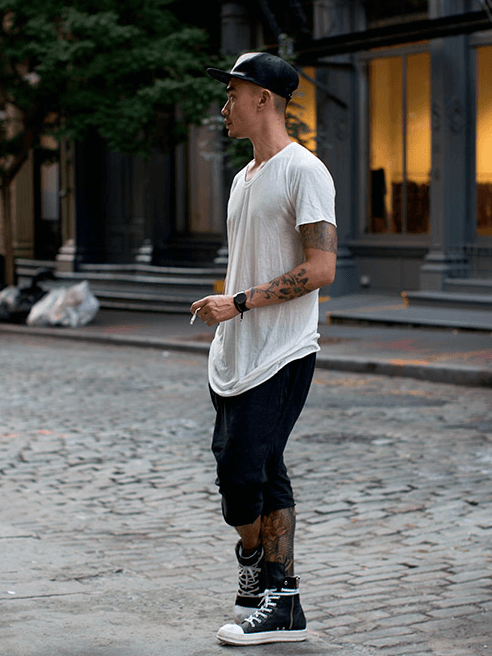 Like the newer Geobasket design, Island Dunks have blucher-like eyelet tabs that extend to the sole.

Unlike Geos, the Island extended eyelet tabs are intended to be left unlaced so as to give a “hooded” or “hoofed” foot effect.

On the original Island Dunks the eyelets are hidden beneath a leather covering whereas the modern Islands have one thick tab built for increased simplicity and durability.

As with most Rick Owens footwear, Island Dunks come in monochrome black, white, or tan.

The shoes are also found in a tri-colorway and tri-leatherway design, most often mixing brown leather or pony hair with white and black calf.

The Island’s stitches are unique in that they neatly and geometrically intersect in clean, straight lines.

As with most high Rick Owens shoes, Island Dunks have a YKK zipper on the side for ease of use. 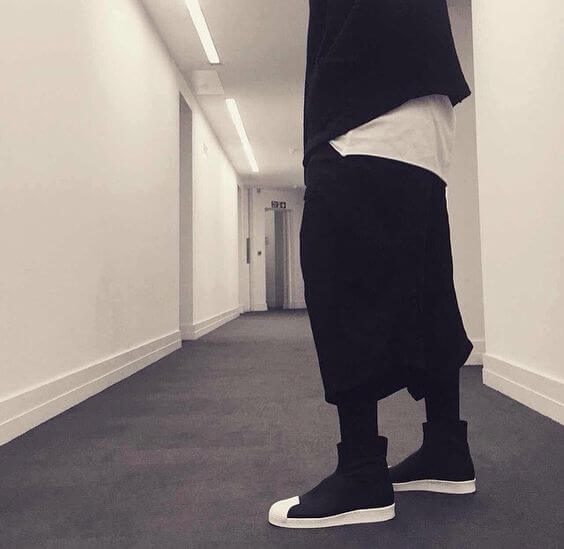 Spring 2014 brought Rick’s first runner to the fore in collaboration with Adidas technologies.

This shoe likely has the most aggressive silhouette in the Rick Owens shoe catalogue to date.

The shoes keep the iconic Rick Owens saw-tooth outsole, but the sole itself is most surprisingly split into two completely separate pieces that give the shoe a hoof-like appearance.

The sole is constructed on a hard arch that gives the base stability and keeps the shoe from folding.

The Runner might be called a mid-top sneaker, but the shoe has a massive padded tech-fabric collar that elevates the shoe’s upper high above the ankle.

Complementary to the collar, the shoe has an extended geometric tongue.

The Runners can be found in variants comprised of calf, suede, and nylon with Adidas stripes subtly perforated into the sides of the shoe.

The upper also has tonal stitching, and the insole is fully leather.

Newer version come in military green, beige, and orange colorways. Beware, unlike most Rick Owens made-in-Italy footwear, the Adidas variants are made in China and occasionally have small imperfections like glue residue. 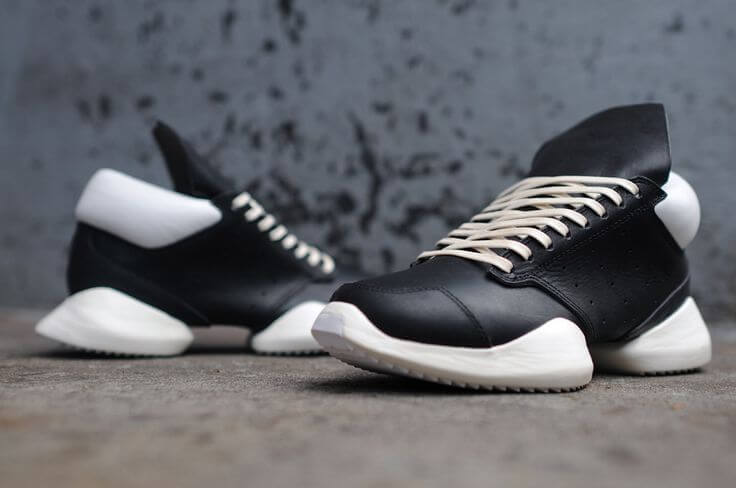 The shoe’s toebox is nearly identical to the original Runner, as are its perforated Adidas stripes.

Unlike the Runner, the Tech Runner’s heel has a contrasting synthetic patch. A shorter tongue contributes to a lower profile, as does the less pronounced collar which dips below the ankle.

For reduced weight and increased flexibility, the upper has a mixed material composition including suede, calf, and neoprene. Unlike the Runner the Tech Runner has a synthetic sock lining for cushion while running.

The Adidas triple stripe branding is located on the heel strike. The sole of the shoe is its defining feature, with an angular sculpted midsole and serrated outsole that extends past the heel and squares the back of the shoe.

The beveled sole is simultaneously brutalist and modern.

Colorways come in combinations of black, off-white, grey, bone, and tan. Again, these Adidas collaborations are made in China and may have some minor imperfections so it is best to buy in person. 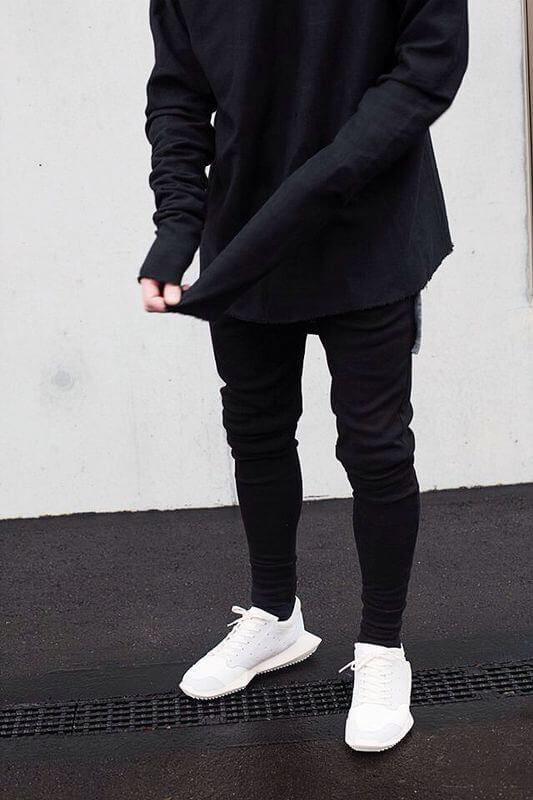