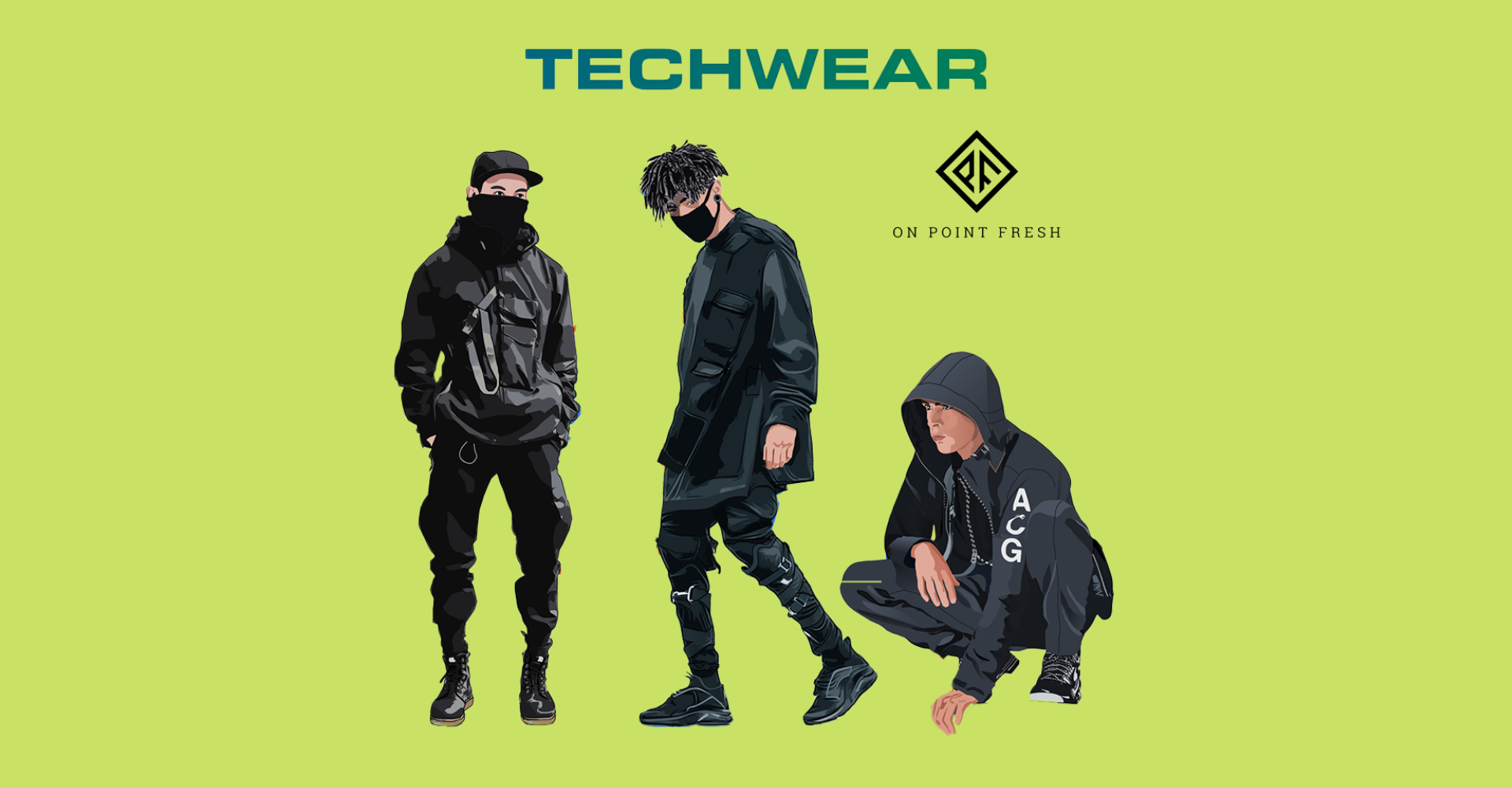 The future is matte.

Born out of the unlikely crossover between fashion and the outdoors industry, urban techwear (or “techwear”, for short) is an emerging style that blends form with a relentless focus on function.

While athleisure often straddles the line between aesthetics and utility, techwear chooses to ignore the line altogether: in our technology-enabled future, why couldn’t someone have both?

Most contemporary fashion is content to riff on the past. Instead, techwear forgoes the familiar in favor of function. Bright, nylon anoraks become shine-resistant jet black shells.

Standard cotton trousers become high-stretch Ripstop cargos. Even workboots get an upgrade: from bulky leather to ultralight Flyknit “shield,” a complete techwear wardrobe signals a paradigm shift, a leap of faith towards the full potential of the state-of-the-art.  ‘

The techwear aesthetic is heavily influenced by futurist artistic styles such as cyberpunk (think Blade Runner or Ghost in the Shell).

In execution, most techwear falls into one of two categories: “grey” (sleek, understated, the amplified familiar) or “black” (striking, military-inspired, the future circa 1985).

Regardless of category, a typical techwear jacket is matte black, tailored to move, and made entirely of GORE-TEX’s three-layer waterproof fabric. The difference comes from how that function is styled.

Grey techwear takes its name from the concept of the “grey man,” a security business term for an agent dressed to blend in but equipped to do anything but.

Techwear of this sort looks like standard clothing, but is constructed from high-tech fabrics and designed for ultimate functionality. Examples of “grey” techwear brands include Arc’teryx Veillance, Isaora, and NikeLab Essentials.

On the other hand, black techwear eschews all subtlety. Borrowing its name from “black operations” (the opposite of the ”grey man”), techwear in this style is bold, brash, and heavily influenced by both military and extreme outdoors gear.

Every kid who grew up watching The Matrix has, at one point, aspired to dress as cool as techwear looks. However, in an age of bomb threats and global terror, donning full black techwear on crowded city streets may get you more looks than you’ve bargained for.

Regardless, when done well, black techwear looks downright badass.  Examples of “black” techwear brands include adidas Y-3, Guerilla Group, and the granddaddy of them all, Errolson Hugh’s legendary ACRONYM.

Through clever tailoring and an embrace of avant-garde aesthetics, techwear is materials science innovation massaged into garments wearable enough for the high street.

When it comes to techwear outfits, there is quite a spectrum. From full on ninja goth to a more subtle version. The following outfits encompass all of what a techwear outfit should be. Technical clothing that looks cool as hell.

Finding brands that sell quality techwear clothing can seem impossible. On one hands you have really cheap junk from overseas that has the look, but either the sizing is off, it looks too cartoonish or is just very poor quality.

On the other hand, brands that specialize in techwear seem to charge unreasonable prices out of the budget of most enthusiast. Regardless, I’ve tried to gather an honest list of techwear brands to help you guys nail the look. If you’ve ever wondered where to buy techwear clothing, this is the list you need.

Before we get started, a word of warning: techwear in any form is prohibitively expensive. Your typical ACRONYM hardshell (yes, the one from that photo) starts just north of four digits and only goes higher.

Conventional wisdom says that in fashion, a buyer chooses two of the following: form, function, and value. Considering techwear’s uncompromising embrace the first two, its hefty price tag should come as no surprise.

But, if you’re ready to take the plunge, here’s all you need to know to master the techwear style.

All great techwear outfits are built on outerwear, full stop. As a general rule, the best techwear jackets are waterproof, durable, and designed for movement, ideally wrapped in a neutral color. In general, err towards GORE-TEX fabrics and zippers in key areas.

The cornerstone of all techwear outfits. The right hardsell jacket will keep you dry through 3 hours of winter precipitation and even stay breathable during activity. Try getting that from a peacoat.

The best techwear jacket is only as good as what’s underneath. Our recommendation: go for a slouchy extended tee under a warm mid-layer, ideally a goose down jacket or high-tech fleece. In the outdoors industry, this is referred to as the “base-mid-shell” system. This three-layer design ensures rapid adaptability both inside and out.

Most technical shells lack insulation by design, leaving the warmth factor up to a user’s individual needs. Layer a performance mid-layer under your jacket for the ultimate in customized insulation.

Next, do the details. The difference between “technical athleisure” and true techwear rests in high-function features like hidden vents, specialized pockets, and taped seams. In many ways, these tech details differentiate techwear from scaled-down looks like athleisure or sportswear.

Just look at a pair of Guerilla Group pants vs. your athleisure cargoes from H&M: both are black, tapered, and heavy on pockets, but only one drips the sort of utility features (articulated joints, intersecting seams, water-repellant coating) that mark it “techwear.”

Fashion, function, and lightweight style. The base layer that cover all your bases.

Bags and Slingbags built for a high-mobility urban lifestyle. Bring everything you need with you without frying your laptop when it rains. Even better, do it in style.

Even with space-age layers and every detail in line, the wrong shoes can throw off your vibe entirely. As a general rule, choose techwear sneakers either made of cutting-edge materials (Flyknit, Primeknit, neoprene, etc.) or have visible “tech” features that supplant their more humble construction (ex. a leather sneaker with a zipper entry).

Like with most things in this style, ACRONYM is the gold standard for technical footwear. The Berlin design firm’s Air Presto and Lunar Force 1 collaborations represent techwear sneakers at their highest form.

Athletic shoes have long pushed the envelope for performance design. While some sneakers are content to push, others choose to shove.