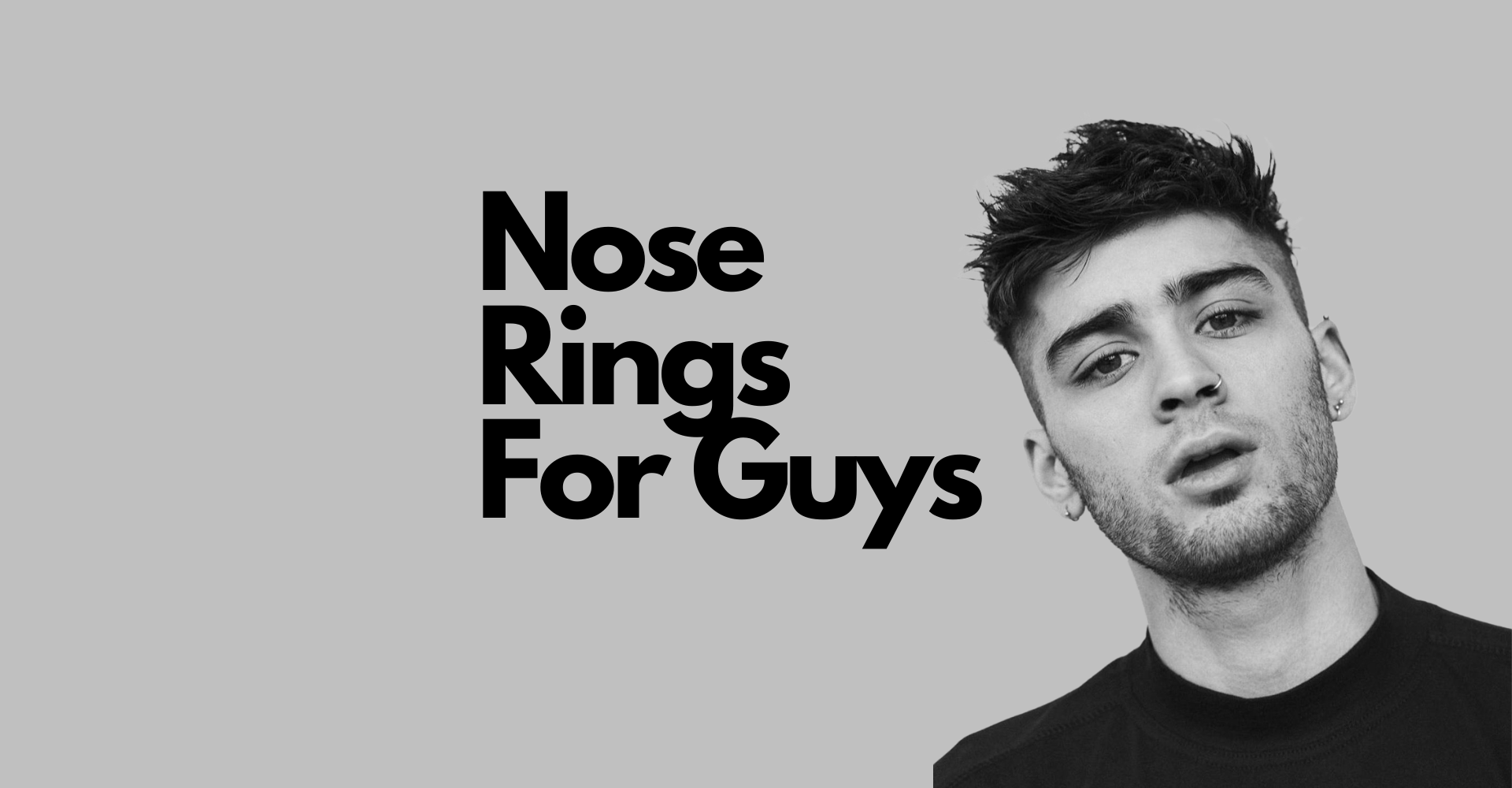 We understand it can be tricky to decide if a nose ring is right for you. The trend of nose rings has become incredibly popular in the last few years, and it’s become much more common for guys to get their noses pierced and have many ring styles.

The nose ring look isn’t necessarily right for everyone, but that doesn’t mean that guys don’t look good with them. It completely depends on your own preference and style. Here is our guide to nose rings on men if you’re thinking of getting it pierced.

The famous R&B artist has had a nose ring for a while. The former boy band star left his group in 2015, leading him to adopt a more alternative look and style.

Usually, he opts for a silver or black nose ring, which compliments his wide variety of tattoos and dark clothing choices. In past times, Malik has also dyed his hair different colors such as blonde and jet black, which add to the goth style that nose piercings compliment.

Lenny Kravitz is a prime example of a celebrity that pioneered the male nose ring trend. Kravitz now has a piercing on either side of his nose, which he uses to add interesting jewelry to his look. Sometimes he opts for flashy gold bands, and other times he keeps it simple with a silver band or stud.

The legend himself, Tupac, is a great example of a male celebrity that effortlessly pulls off the nose piercing look. Shakur has one piercing in his nose and usually keeps the band or stud rather simple. His choice of nose ring is a more subtle example.

Justin Bieber is all grown up now, and one of the ways that’s obvious is his choice of a nose ring. He usually keeps it as a silver ring or stud, but like Malik, this kind of piercing goes well with Bieber’s many tattoos and streetwear style.

Now a future part of the Kardashian clan, Travis Barker will be an interesting addition to the family due to his goth, alternative style of clothing. He has many piercings, including a nose ring, and likes statement silver jewelry or a black ring.

As nose rings have surged in popularity, it has become much more normal and common to see men of any sexuality with nose rings. At this point, it’s acceptable for straight men to have a nose ring or other kinds of piercings.

The nose ring is commonly worn by guys with a more “alternative” sense of style, such as clothing that aligns with the streetwear and skateboarding fashion styles.

If your style leans towards business casual or athleisure, a nose ring probably wouldn’t fit your outfits, but if you enjoy graphic T-shirts, beanies, and oversized hoodies, a nose ring would fit your aesthetic no matter your sexuality.

Which Side Should a Guy get a Nose Piercing on?

Today, which side a guy should get a nose piercing on truly does not matter. It mainly depends on your own preference based on facial features and comfort level. However, there are some cultures that interpret a man with his right nostril pierced to be gay. This aligns similarly with men getting their right ear pierced.

It’s not common in modern times for people to see a man with a piercing on the right as gay, so unless you want to stick closely with the rules of some traditional cultures and religions, either the right or left works just fine.

When deciding which side to get pierced, it’s important to remember a few things. First and foremost, your own facial features. Everyone’s face is asymmetrical on some level, and usually, people have a favorite “side” of their face. This can be a good way to decide which side to get a nose piercing on since you’d want to choose a side that you’d like to draw more attention to.

Beyond your facial features, it also depends on your comfort level. This may sound ridiculous, but take notice of details like which side of your nose you scratch more, which side you like to sleep on, and which nostril would be easier for you to clean and take care of after a piercing. These are all important factors of comfort that many people overlook.

It’s a good idea to test out a nose piercing before you decide to go all in. You could use piercing filters on Snapchat, Tik Tok, or many kinds of face editing apps. There is also the option of buying a fake piercing to try for a little while until you commit to a real one.

Luckily, there are many options for you to see how you like the fit, feel, and look of a nose piercing before you actually get one.

What Type of Nose Ring Should A Guy Wear?

There are so many options for types of nose rings to wear. Usually, it’s recommended to start out with something simpler than a ring, like a stud. A stud is a simple bar, typically with a gemstone or metal ball at the end.

Piercers recommend starting with this because it allows you to adjust to a new piercing without the possibility of it getting caught as a ring would. However, it’s totally fine to start out with a ring if that’s what you’d prefer. Rings come in different diameters, so you can choose different sizes depending on the size of your nose.

There are multiple metals to choose from, but a safe choice is always stainless steel since it’s hypoallergenic and affordable. There is also gold, silver, and other types of metal such as platinum or titanium. Remember that you have plenty of choices, and to take proper care of whatever type of nose ring you choose.