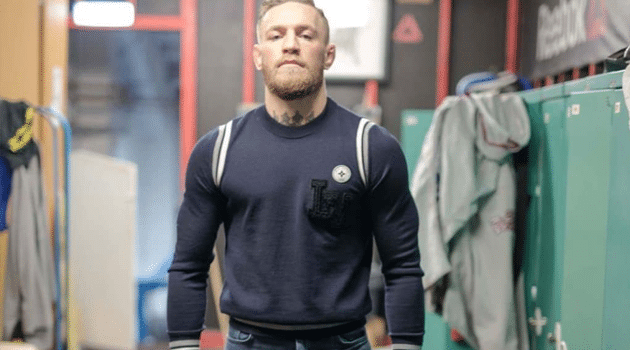 Conor McGregor has impeccable style that works extremely well for him. If he didn’t you wouldn’t be searching about for his style and how to dress like him!

With that said, a lot of what makes Conor McGregor’s style work in 2020 goes beyond the clothes he wears. Let us dig in a little deeper.

Conor’s confidence exudes through every fiber of his being. I mean, you would be dripping with confidence too if you knew you could kill most people in any room with your bare hands.

The way he walks, talks and postures has a big effect on how he’s perceived. Conor can be wearing a potato sack and no one would say anything to him because he’s a Conor McGregor!

Conor has a very sculpted and muscular physique, he is a professional athlete after all.

His stats are somewhere around 5’9 in height and he walks around 165-170 lbs when not fighting in the cage and weight cutting. All of this with very little fat on his body.

A lot of what Conor wears works BECAUSE of his lean and muscular physique, which is why he favors slim fit garments that accentuate his body.

Now having a physique like Conor’s also means doing the heavy work on your legs – jeans and chinos look great on him because he doesn’t skimp out on leg day!

Now besides just utilizing his marble sculpted physique to choose the garments he wears, Conor does seem to have a good sense of fashion himself. (He does have his own clothing brand after all: August McGregor).

He understands layering, using colors and other fashion basics so he is obviously a bit of a style expert himself.

Contrary to what people say a lot of what Conor wears isn’t SUPER flashy. I mean sure, when he wears a Gucci mink to a press conference that’s extremely flashy – but context matters,  he’s putting on a show and being super flashy is pretty appropriate in that context.

In his day to day wear, his wardrobe consists of really basic items (although he does love his designer brands) none of what he wears is too out of the ordinary.

Well fitting jeans, tops, and sneakers paired with a know how on how to combine these pieces with his great physique and you have McGregor’s casual daily wear!

Could be a simple plain block colored crewneck sweater or a turtleneck, he loves his tight fitting sweatshirts.

And by well fitting I mean really slim fitting, leg hugging jeans. This works super well on him because he obviously works out his lower body a ton. Don’t do this if you have chicken legs!

Conor doesn’t just wear designer sneakers – although he loves his gucci and louis vuitton sneakers – even some cool reeboks work for him if they’re simple and minimal.

A nice watch, a few simple necklaces and even tattoos all help to put his look together.

A lot of what makes Conor always stand out is his super slick hairstyle and beard combination. It adds a ton of character to his look.

That’s all folks! Hope you enjoyed our style break down on Conor Mcgregor.