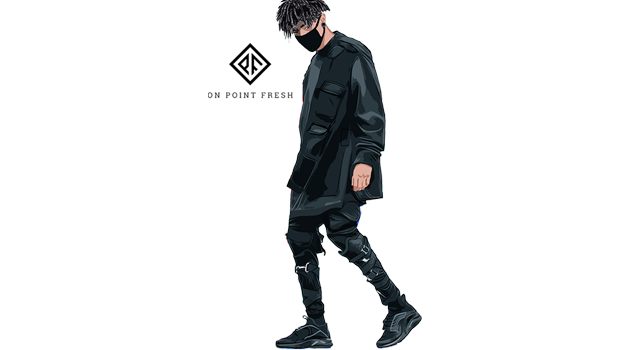 Scarlxrd (pronounced as Scarlord) is a British rapper that produces music combining components of genres such as trap music and heavy metal. He first started as a YouTube personality, creating vlogs and making comedy music. During this time, he belonged to a band that produced music similar to the genre he creates now. This band, called Myth City, would lead the way to his solo debut as Scarlxrd in 2016.

Scarlxrd performs in smaller venues around the United Kingdom and has a solid following dating back to his YouTube career as well as new followers due to his music career. His style is also influenced by Japanese culture, which can be seen with Japanese lettering on his albums and his personal style. He is viewed as a pioneer of the “trap metal” genre, which includes busy trap beats, screaming, and heavy guitar. He also owns a clothing company called DXXMLIFE that produces clothing similar to his style.

Scarlxrd has a very specific style that reflects the genre of music he creates. His clothing is mainly inspired by the style of techwear, which is a very futuristic look that focuses on intriguing fabrics and dark colors. Scarlxrd’s style is also influenced by Japanese streetwear, which emphasizes baggy clothes and interesting adornments. His outfits usually feature military-style clothing with chains, rips, and asymmetry. His trademark item is his black surgical mask, and it is said that he wears the mask in order to detach himself from his earlier comedic YouTube career.

In his first outfit, Scarlxrd is wearing a baggy, asymmetrical sweater with a cargo vest sewn onto it. This reflects the element of the techwear style that is influenced by military clothing. He is also wearing cargo pants that are tapered at the ankle, the jogger style, and his calves are wrapped in a variety of belts, straps, and fasteners. He wears large black and silver studs on his ears and a headband with chains attached to it. On his feet are simple black sneakers, complimenting the rest of the all-black outfit.

In his second outfit, Scarlxrd is wearing a black hoodie from his clothing brand DXXMLIFE. The hoodie displays the brand name in white. On top of the hoodie, he has a black trench coat with large buttons and buckles on the sleeves. On the bottom, he has a similar pair of cargo joggers equipped with plenty of pockets. These joggers are also from his personal brand. Again, he is wearing black and silver studs. Completing the look is a thick silver chain around his neck and black sneakers with glowing white stripes.

For his third outfit, Scarlxrd is wearing a black Harley Davidson T-shirt with dark red and white lettering. He has his signature black cargo pants, which are again tapered at the ankle, and those are equipped with plenty of straps and pockets. On his feet are black sneakers. In this outfit, Scarlxrd neglects to wear a jacket or hoodie, which showcases his tattoos on his arms, hands, and neck. As usual, all his outfits are completed by his black surgical mask.

Where Scarlxrd buys his clothes

The most prominent brand that Scarlxrd wears is his own, DXXMLIFE. This brand is solely online from the website. It features a multitude of techwear, grunge, and military-style clothing that is Scarlxrd’s signature style. The brand has three collections, and features dark hoodies, bomber jackets, t-shirts, joggers, and even hats and bags. Each item features some sort of symbol, such as the DXXMLIFE logo or Japanese lettering. Many clothing items have chains, straps, and dark colors.

Scarlxrd also wears a wide variety of Nike shoes, such as Air Maxes and Air Force Ones. Nike hosts a multitude of shoe choices that fit Scarlxrd’s dark, grunge style. Sometimes he also chooses to adorn his shoes with chains, which Nike offers. Beyond shoes, Nike offers a lot of clothing options and basics that could help build your Scarlxrd style. Dark hoodies, cargo joggers, and graphic tees are all great options that Nike sells. This brand is also a great choice if you’re looking for a more subtle version of Scarlxrd’s techwear style.

Another brand Scarlxrd has been seen wearing is Supreme, which is an American clothing brand that is commonly associated with skateboarding culture. Supreme has stores all over the world in cities such as New York, Paris, and Milan. They also have stories in Japan, and you can order their clothes online. Supreme offers a variety of grunge style clothing with alternative patterns and adornments. Their dark t-shirts are a staple, along with their baggy cargo pants and big hoodies. Supreme offers basics as well as brighter statement pieces, so choose wisely when shopping at this brand.

The Belgium-based brand MXDVS is a prominent techwear brand that Scarlxrd wears. They offer a wide variety of clothing that aligns with Scarlxrd’s style, such as dark t-shirts with alternative graphics, cargo joggers with straps and chains, and military-style vests. A majority of their clothing is black and slightly intimidating, which fits Scarlxrd’s look. MXDVS ships from worldwide from Belgium and is online only. They have a lot of options that are on par with Scarlxrd’s style, so this is a great place to look when starting out.