The Complete Guide to Buying a Bulova Watch 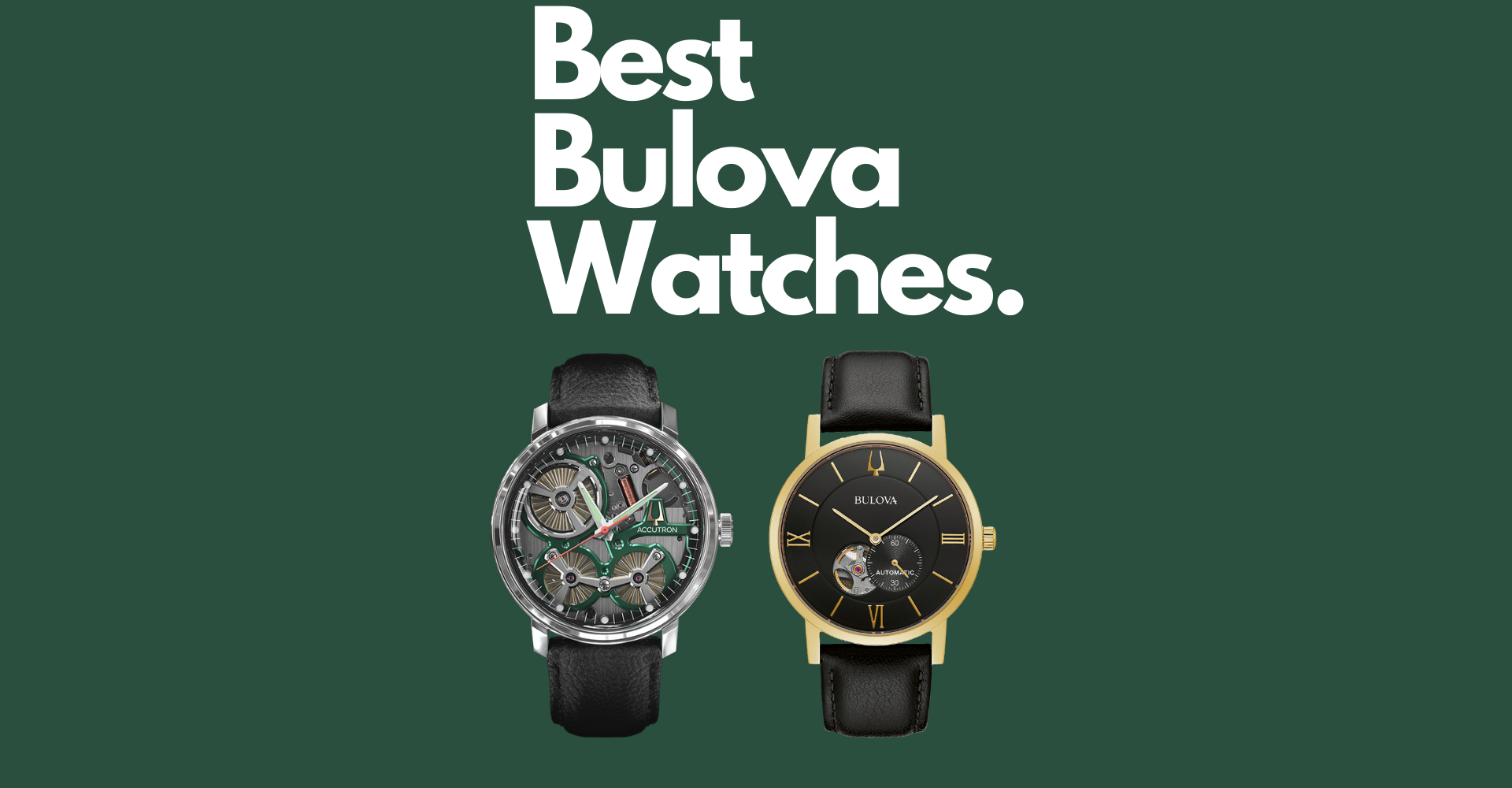 The History of Bulova Watches

Often certain brands or products are inextricably intertwined with their country of origin such as Sweden’s IKEA, Australia’s Red Bull sports drink, and Canada’s maple leaf, just to name a few.

The Bulova watch company is one such brand for the United States. Although they have become one of many mainstream popular watch brands today, they remain more than just a good watch brand, and Bulova history is nothing short of legendary.

It all began when at 19 years old Joseph Bulova came to New York from Bohemia (present-day Czech Republic). Since he was already a certified watchmaker he was able to get a job at Tiffany & Co. After working there for a few years he founded the J. Bulova Company in 1875.

Arguably his most influential accomplishment, he simultaneously pioneered the mass production of watches and the standardization of watch parts. He is often called the Henry Ford of watchmaking since by making watch parts standardized, manufacturing became much easier. It also benefitted the consumer since they could have a watch for many years and still be able to have it repaired down the road.

This was something that was not guaranteed with other watches and a significant Bulova watch benefit. People often had a personal connection to their watches, so if they wanted to keep them the watch would eventually need to be repaired.

In 1919 Bulova created the first line of men’s jeweled wristwatches. These were popularized not by New Yorkers as you would expect, but rather by men in the military during WWI who started using them because it was easier to glance down at their wrist than pull out a pocket watch.

Not a stranger to firsts, in 1924 Bulova also created the first line of ladies’ wristwatches. Instead of choosing one style, he created a collection of different styles mirroring what was popular at the time so that women could choose what best reflected their look (a novel concept at the time).

The 1920s and 1930s were the art deco era and truly the heyday of Bulova creativity. Blurring the lines between jewelry and watches, Bulova created many pieces that functioned as jewelry while also telling time which gave a Bulova watch multiple benefits and an edge over the competition.

In terms of marketing, the Bulova Company creatively pursued a variety of opportunities. In 1926 they ran the first national radio commercial and in 1941 they ran the very first television advertisement (which cost $9.00 to produce and run). Invested in empowering women, they ran an ad on the front of Time magazine stating “Equal Pay / Equal Time” to introduce a new line of watches for both men and women. In introducing the Golden Clipper watch in 1970, they had 100 swords created by the Wilkinson Sword Company, the Queen of England’s appointed sword and gun maker. These were offered to the first 100 customers.

What is the quality of Bulova watches?

Bulova offers a handsome descendent of the golden clipper, the American Clipper. Its gold-tone stainless-steel case surrounds a combination black face with a minimal open aperture and sub sweep dial. The case back is exhibition, giving you a view of the 21-jewel automatic heartbeat movement. Gold-tone hands, markers, and tuning fork are elegant reminders of its ancestry. Ranging in price from $120 to $450, this classic watch provides all the best of the Bulova watch benefits.

Whether sitting atop the world’s fair entrance, La Guardia airport, major sports arenas, or the first Beatles tour concert, Bulova clocks, just like Bulova watches, were at the frontier of invention and discovery. During the 1950s a marriage began to grow between the Bulova Company and the U.S. Government. Their clocks and clockwork systems were used to develop missile guidance systems, telescopes, mine detectors, and other military devices.

In 1960 the Bulova Watch Company invented their most famous device, a tuning fork called the Accutron 214, which they used in watches as well as clocks. The tuning fork was a timing mechanism that provided such incredible accuracy it was installed in military satellites and was also installed on the infamous Apollo spacecraft. Even at this moment, there are several Accutron 214 timing devices sitting on the moon’s Sea of Tranquility. And although the Omega Speedmaster was the official watch of the American astronauts, Commander Dave Scott wore his Accutron watch on the Moon in 1971 when the crystal popped off his Speedmaster.

Although Bulova retired the Accutron watch in 2014, they relaunched it in 2020. Now a part of the Spaceview collection, the renamed Accutron features a proprietary electrostatic movement, domed sapphire crystal, and turbine system. The dial is a fascinating open-work design, and the timeless leather band is available in green, black, or brown. Take your pick of either the $3,450.00 or the $19,600.00 version and you will be able to enjoy for a lifetime what is aptly referred to as a “conversation piece” from one of the best watch brands available.

Which Model Should You Buy?

Since 2008 when Citizen bought Bulova for $250 million, they have designed and marketed multiple different brands. With so many Bulova models available the selection can be overwhelming so here’s a few more of what’s currently trending:

If you’re thinking the best Bulovas cost more than you would want to pay for a watch, don’t worry, in their relentless pursuit of perfection, Bulova introduced the Precisionist at an affordable price range from $250 to $500 (although some models range in the thousands). Touted as the world’s best chronograph watch, the Precisionist is a new type of quartz watch whose crystal has a frequency eight times higher than the industry standard and is accurate to the 1/1000th of a second. Unlike other quartz watches, the seconds hand sweeps continuously. The Precisionist’s expert technology and innovative design prove Bulova’s watch quality is not just a blip in history but an enduring beacon for watchmaking worldwide.

Just as well-known as the Precisionist, the Marine Star is another Bulova watch standard. Available in multiple styles, this Men’s Marine Star Watch is a versatile dress watch with a brushed steel band and rotating bezel. The black dial and luminous markers keep this beauty fashionably sleek and modern. If you prefer a more adventurous version, this Marine Star sports a grey silicone strap and an open aperture design. The gold-tone case and grey outer ring add a dressier element giving this watch the ability to pair with anything from loungewear to your ritzier looks.

Another dress watch option is the Men’s Multi-Function Modern Stainless Steel watch from the Classic Collection available in black and gold or black and silver. This sleek design is minimal but far from underwhelming. The black dial has quadruple functions including day, date, and 24-hour feature, demonstrating yet again the Bulova watch benefits are many. The black stainless-steel case and domed mineral glass seamlessly combine in this sexy timepiece.

In existence for over 145 years and still cutting edge, the Bulova Company makes watches that can last just as long with proper maintenance and care. It’s no surprise that it remains one of the best watch brands available. However, a Bulova watch is more than just the sum of its parts, wearing a Bulova is like wearing a part of history. And considering Bulova’s clocks are still sitting pretty on the Sea of Tranquility, you’re wearing a part of the future, too. 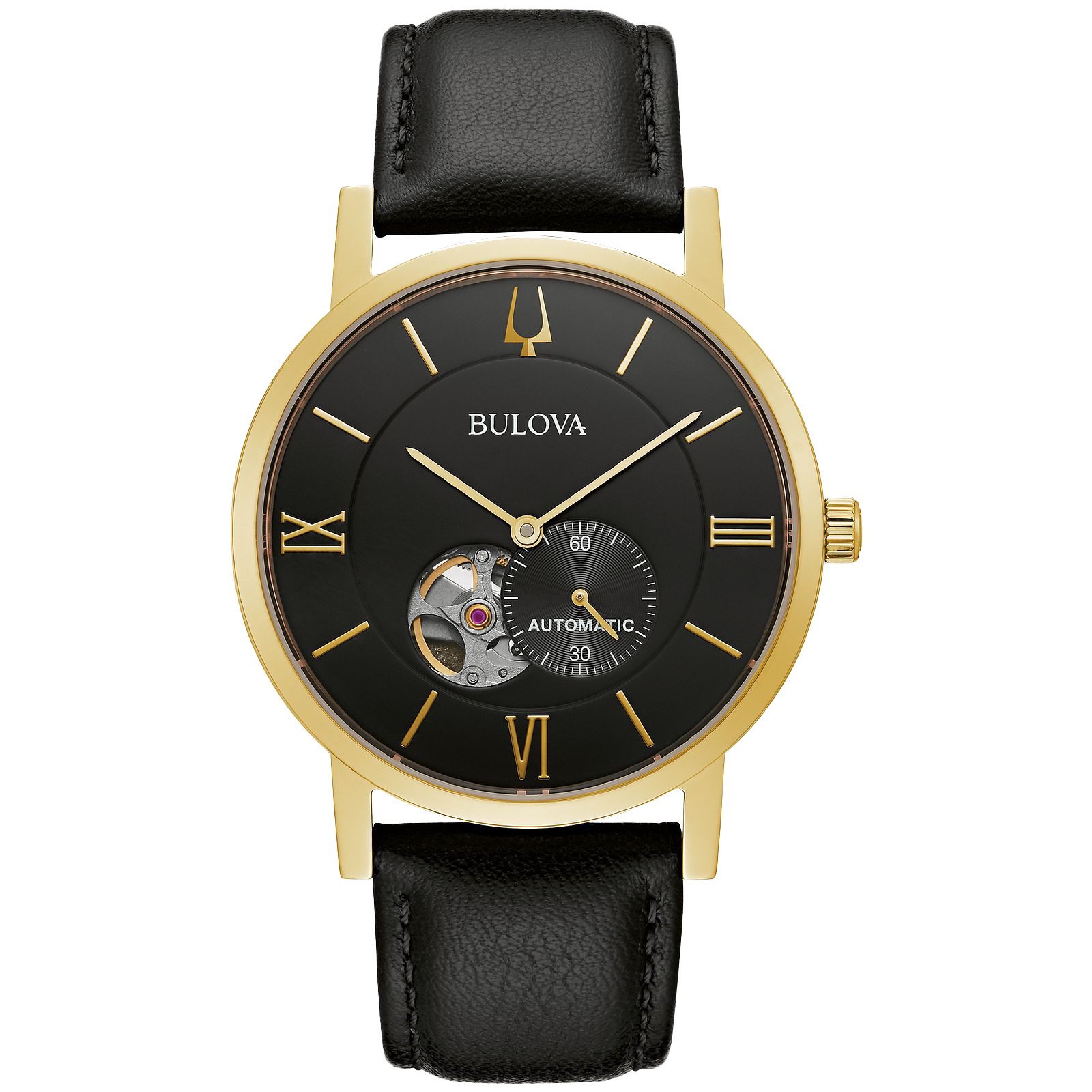 Overall: Whether you’re holding your team meeting or having a night out on the town, you’ll always have a story to tell with this handsome American classic. 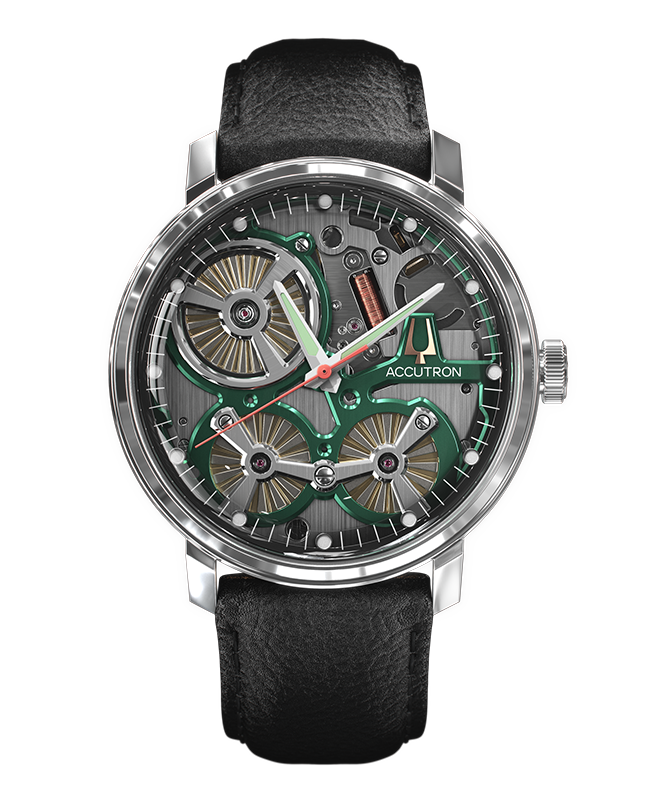 Overall: The signature tuning fork design that put Bulova on the moon, this self-powered iconic piece is an investment you won’t forget. 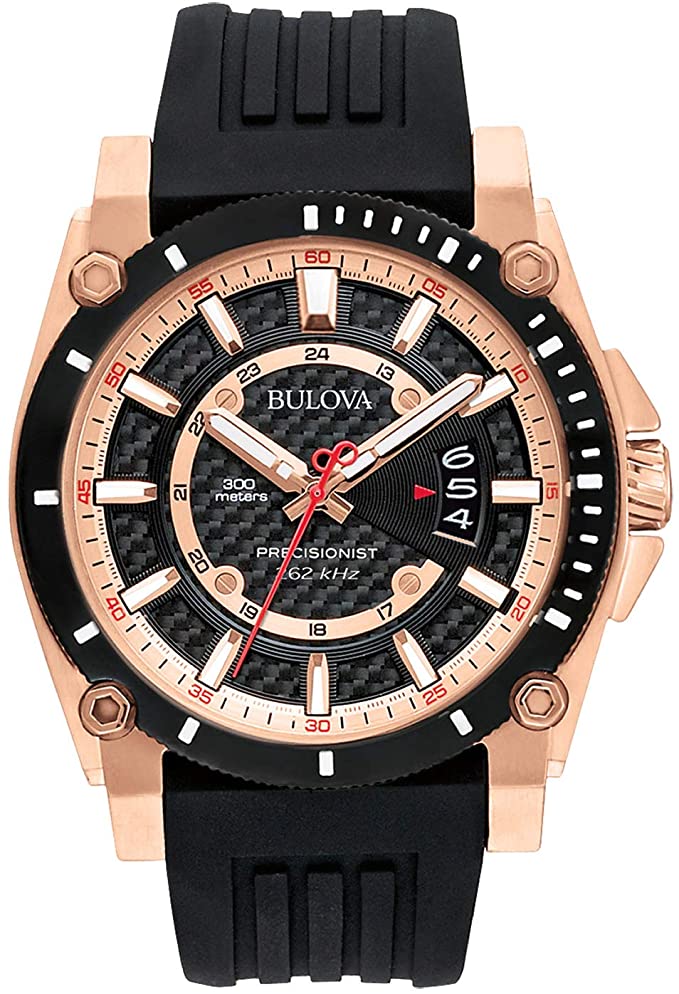 Overall: Definitively rugged and yet versatile enough to wear with a suit. This handsome sports watch is that friend who is ready for any occasion. 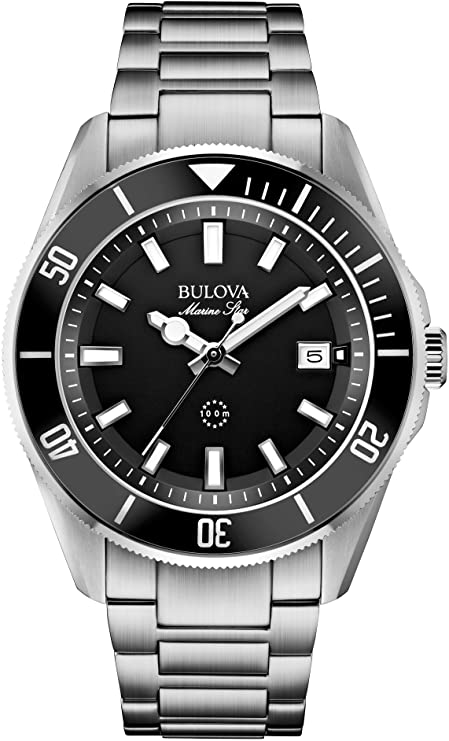 Overall: The Marine Star is one of the most popular Bulova models for a reason. This one shines as a versatile dress watch. With a black dial and luminous markers, this beauty can accompany any look.

Overall: This sportier version of the Marine Star is a watch that has it all. A rose gold-tone case showcases a three-hand automatic movement in an open aperture design. 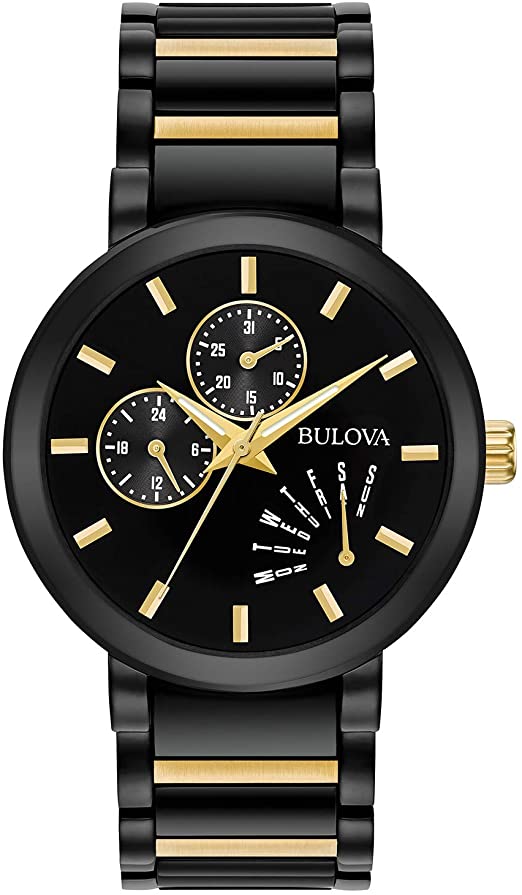 Overall: This ultra-modern Bulova is about as sleek as a dress watch gets. The black dial with quadruple functions is so seamlessly designed you’ll find yourself a bit too excited to check the time.