The Complete Guide to Military Style Jackets for Men 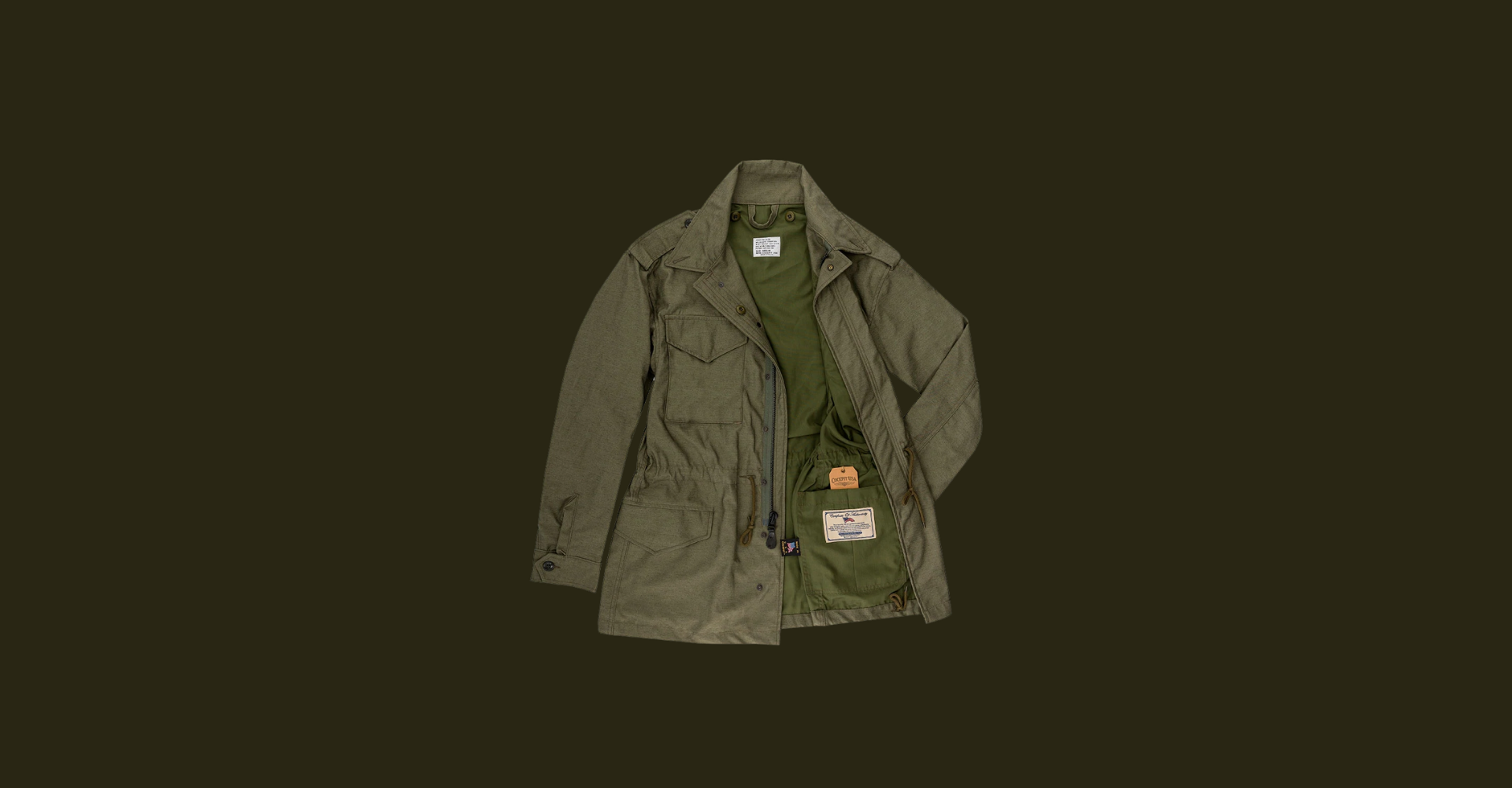 Throughout history, military fashion has influenced that of civilians. Aviator glasses, combat boots, and bomber jackets have all featured prominently in mainstream fashion. Runway fashion has taken influence from military uniforms that date back to the 1700s, so military looks have proven to be timeless and eye-catching.

Today, we’re going to discuss military jackets and outerwear, which have found their way into mainstream male fashion. We’ll split them up into categories and look at a few different varieties that have been proven to be the most influential.

Field jackets are the typical army jackets that you see worn by soldiers in old war clips. They are designed to be durable yet lightweight and have been popularized by movies like Taxi Driver. Field jackets have some of the most distinctive “military” styling, as they often come in shades of green or even camo patterns.

The M-51 is a classic field jacket that is made out of canvas and features a military green coloration. As can be deduced from the name, this model of jacket was introduced in 1951, and it features four pockets, ensuring a proper balance between utility and fashion.

This jacket is versatile in other ways, as it also features a detachable hood for use in rainy weather. Known for its distinct baggy look, the M-51 is a versatile jacket that is typically worn with more casual wear, though it can still work with a formal outfit.

Finding an M-51 can be a bit of a challenge, especially if you’re looking for an authentic one, as they aren’t produced any longer. Resale sites are typically your best option. Cockpit USA sells an M-51 jacket that is built to the original pattern, though it’s a little pricey.

The M-65 was the M-51’s successor, distributed to troops starting in 1965. If you’ve ever seen tapes of the Vietnam War, then you likely know exactly what the M-65 looks like. This jacket got its silver screen debut in Taxi Driver, being worn by Robert DeNiro’s character, which propelled it to the forefront of male fashion.

The collar is the easiest way to tell the difference between an M-51 and an M-65, as the latter features a stand collar instead of a shirt collar, providing a bit more protection against the elements.

The buttons on the collar and cuffs were also replaced with velcro so that they could be easier to manipulate in stressful situations where a soldier’s hands may be shaking.

If you’re looking for one of these jackets, you can find it available from Alpha Industries, the company that originally fulfilled the US government contract for these jackets.

As evidenced by their name, flight jackets were designed to be worn by flight crews, so they had to be warm while still remaining resistant to wear. Bomber jackets have become a definitive icon in the realm of male fashion, perhaps more than any other piece of military outerwear.

The A-2 flight jacket is the classic leather WWII jacket worn by aircrews, including both fighter and bomber pilots. This high-quality flight jacket was originally designed for open-cockpit aircraft, so it’s warmer and more durable than other kinds of flight jackets.

The lining of the A-2 can either be silk or cotton, and the ribbing around the waist is one way to distinguish it from other leather flight jackets. This jacket has influenced the design of many contemporary bomber jackets, and there are plenty of clothes that look similar to it but don’t share the exact design.

Today, finding an A-2 is a challenge, especially if you aren’t trying to pay a premium price for it. Once again, Cockpit USA has a replica of this jacket available, and that’s probably the lowest price that you’ll find it for.

The MA-1 bomber jacket has recently made a resurgence, and it’s perhaps one of the most recognizable articles of clothing on this list. While this jacket was originally made of polyester or nylon, modern variations are available in all sorts of materials, sharing the same basic design.

One of the most recognizable things about this jacket is its heavy use of knit ribbing around the waist, cuffs, and collar. This jacket was developed as a less bulky successor to previous flight jackets, and it offered superior insulation when compared to leather models.

This jacket has recently been adopted by streetwear icons, though it has been part of mainstream fashion since at least the 1970s. Once again, Alpha Industries still produces this jacket, and you can find it on Amazon and from various other online retailers.

Unlike other kinds of military outerwear, naval coats tend to be long and cover more of the legs, providing protection from cold wind and seawater alike. Historically, the Royal Navy of England developed many of these naval coats due to their huge naval presence throughout the past three centuries.

Pea coats have been around since the 1700s, and they were developed for sailors on Royal Navy vessels. Made of wool, these coats are resistant to water and the cold, perfect qualities for naval outerwear. Incidentally, this makes pea coats an excellent choice for colder environments with harsher weather.

These coats are typically double-breasted, and they are a bit shorter than other kinds of coats, exposing more of the legs to the elements but making them easier to move around in. Historically, the length of a pea coat was related to the rank of the officer wearing them, with higher-ranked officers having longer coats.

Unlike other kinds of military outerwear, pea coats are still relatively easy to find, mainly because they have crossed over into mainstream fashion. Affordable choices include this model from Tommy Hilfiger, or you can opt for a high-end choice.

The duffle coat is very similar to the pea coat and differs largely in the details. The similarities include its origins and the kind of material used: wool. Duffle coats are longer than pea coats, and they feature toggle closures instead of buttons.

Another key difference is that the duffle coat often features a hood, making it more suitable for use in the rain and snow. Duffle coats were extremely popular with British sailors during the First and Second World Wars, and the large number of surplus duffle coats left over after WWII further popularized it.

Much like the pea coat, duffle coats are still relatively common, though they aren’t quite as widespread. Gloverall has long been known as the primary maker of duffle coats, and their Original Monty is a prime example of this style.

Also known as the snorkel parka, this coat was developed for the US military runway personnel stationed at cold-weather airports and aircraft carriers. This coat was made to withstand temperatures as low as -60, and it got its moniker from its ability to zip the hood all the way up until there is only a small hole to see and breathe out of, reminiscent of a snorkel.

The N-3B made its way into civilian fashion in the 70s, and it has since influenced many makers of extreme cold weather gear, including Canada Goose, Moose Knuckles, and more. One thing to keep in mind is that surplus outerwear like snorkel coats will match or even exceed much more expensive derivatives when it comes to protection from the elements.

Finding a snorkel coat is relatively easy because of how widespread the design has become. Authentic models can likely be found in your local military surplus store, and there are many other alternatives available for quite a reasonable price.

What to Look for in Military Outerwear

Unlike other kinds of clothes, many military jackets are out of production, so you may have to find them second-hand. Like when shopping for anything used, you’ll have to pay close attention to the condition of the jacket before you make your purchase.

Along with a cursory look at the exterior, you should also carefully look over the lining of the jacket, as that’s much more likely to end up worn out than the exterior. Also, keep an eye out for rare pieces in poor condition, as cheaper ones can be restored for a more reasonable price than purchasing an authentic one in mint condition.

When picking a military jacket, you’ll also want to consider the kind of environment that you live in. If you live in a cold climate, a flight jacket or a snorkel parka will suit you better than a field jacket.

On the other hand, you’ll want to opt for a lighter design if you live in a place where it’s hot all year.