The Permanent Layer; Tattoos and Fashion 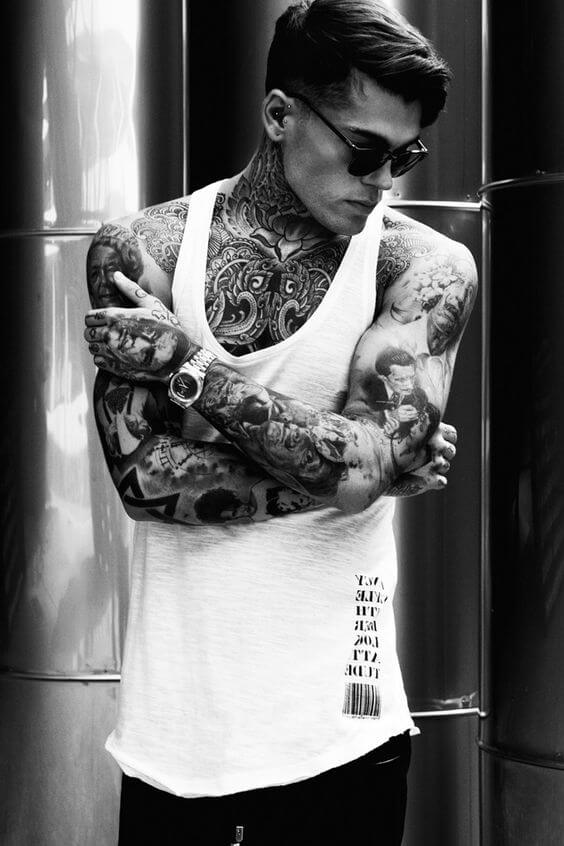 You walk through automatic sliding doors into an upscale department store. You glance at dark suit jackets and browse gabardine ties. One hundred unique t-shirts, some cringe-worthy, take your attention for a full minute. Hangers glide across rails as you assess the scale and shape of each shirt’s pattern. After passing through an invisible wall of musky cologne you pause to evaluate the metallic geometry of wrist watches and the wooden texture of beaded bracelets. Today you are shopping for something that you will wear every day for the rest of your life. This seemingly temporary apparel is not so temporary. It might stretch and fade, but whatever you choose will be irreversibly joined to your body. 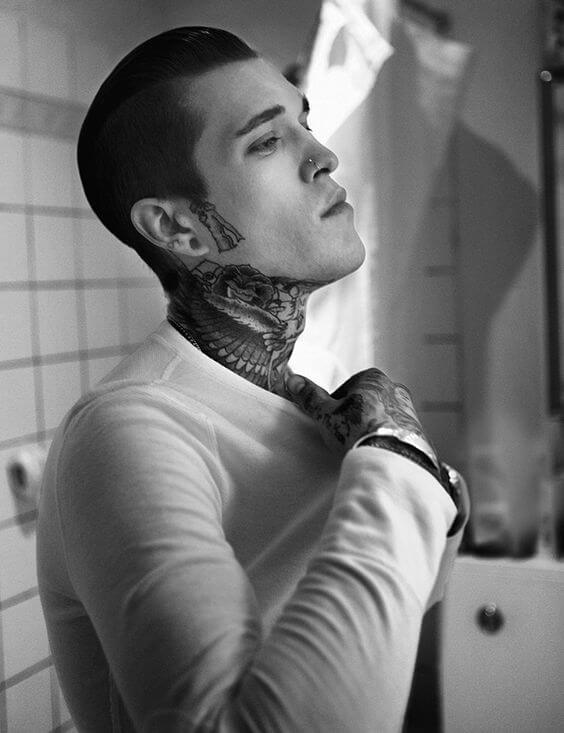 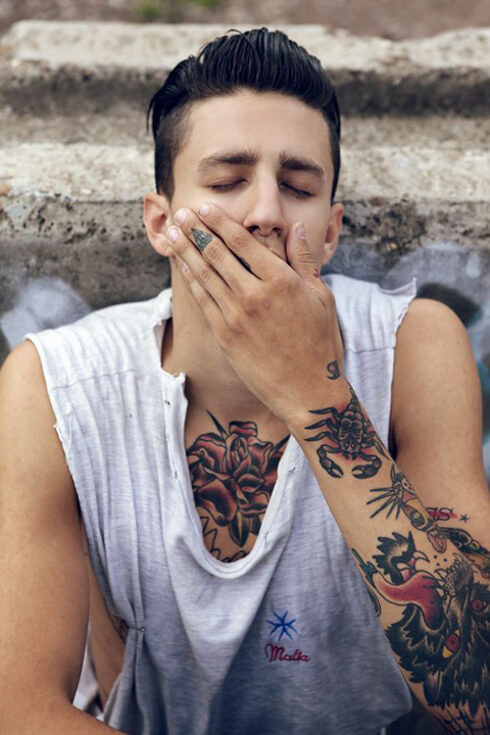 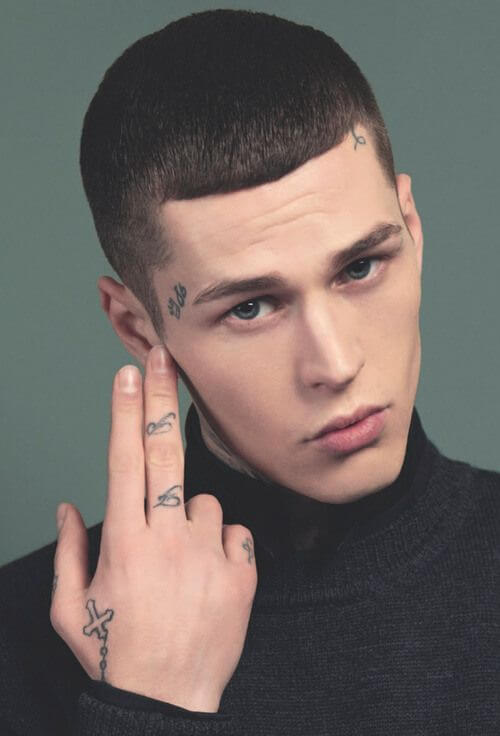 For those that choose ink in lieu of apparel and jewelry this odd tale is a reality. Model, artist, and skateboarder James “Jimmy Q” Quaintance poses for fashion adverts, stars in music videos, and wears a large bejeweled cross necklace inked over an antlered beast. A rosary bead bracelet adorns the wrist of Norman Theuerkorn who has modeled for Hermes, Public School, Rick Owens, and many others. Stephen James, British model and former football midfielder for Nea Salamis Famagusta FC, wears a Star of David ring on his left middle finger. Miles Langford, a runway and advertisement model for Lacoste, Barneys, Calvin Klein, and others, wears a diamond in profile on his middle finger. 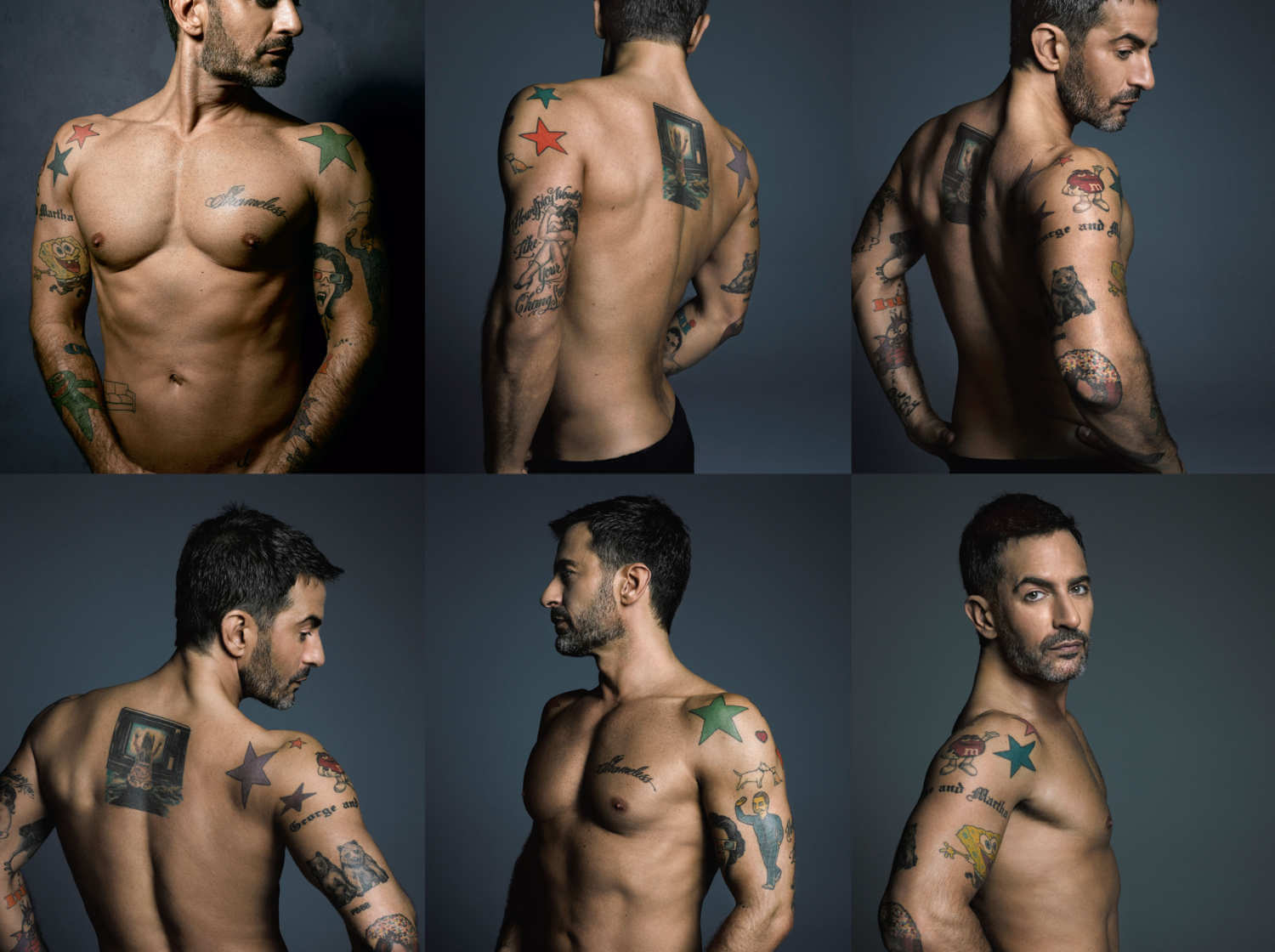 Of course there is far more to tattooing than images of jewelry. Most choose quotes, abstract imagery, geometric shapes, and realistic objects that wrap limbs or float independently on the canvas of their body. Marc Jacobs is an example of all the above. His left pectoral exhibits a fitting title for this art: “Shameless”. His shoulders are spangled in stars of various colors and sizes. A shot inspired by 1982 movie “Poltergeist” is squared on his back. His left bicep presents a majestic Spongebob in motion. A couch is inked on his abs, off-center. Some of Jacobs’ tattoos are so absurd that they delve into the self-referential, Marc’s right arm includes an image of a doll-version of himself in its tattooed glory. Marc displays his machismo with a nude woman on a tricep and elsewhere a tattoo that states “Bros before hos”. The latter is a tattoo that he shares with his tattoo artist Scott Campbell of the tattoo parlor “Saved” in Williamsburg, New York. 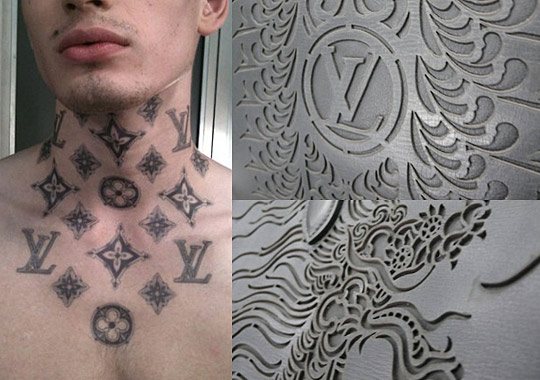 Scott Campbell was essential in the application of Marc Jacobs’ menagerie of body ink, but he has also had an impact on the runway. Campbell was chosen to implement temporary tattoos on models and bag leather during the 2011 Spring Louis Vuitton Menswear Collection. Campbell’s images adorned models’ necks, chests, arms, and legs for the collection. Some sported the iconic Louis Vuitton quatrefoil pattern. Others wore phoenix and feather designs that were paired with sheer shirts, stacked sleeves, complicated shorts, and many sandal styles. Leather bags were scarified with ornate, flowing arrangements. Describing his aim, Jacobs is quoted as saying “I didn’t want anything natural, I wanted everything overly stylized.” Many designers seem to echo this vision in their own tattoo-inspired couture. 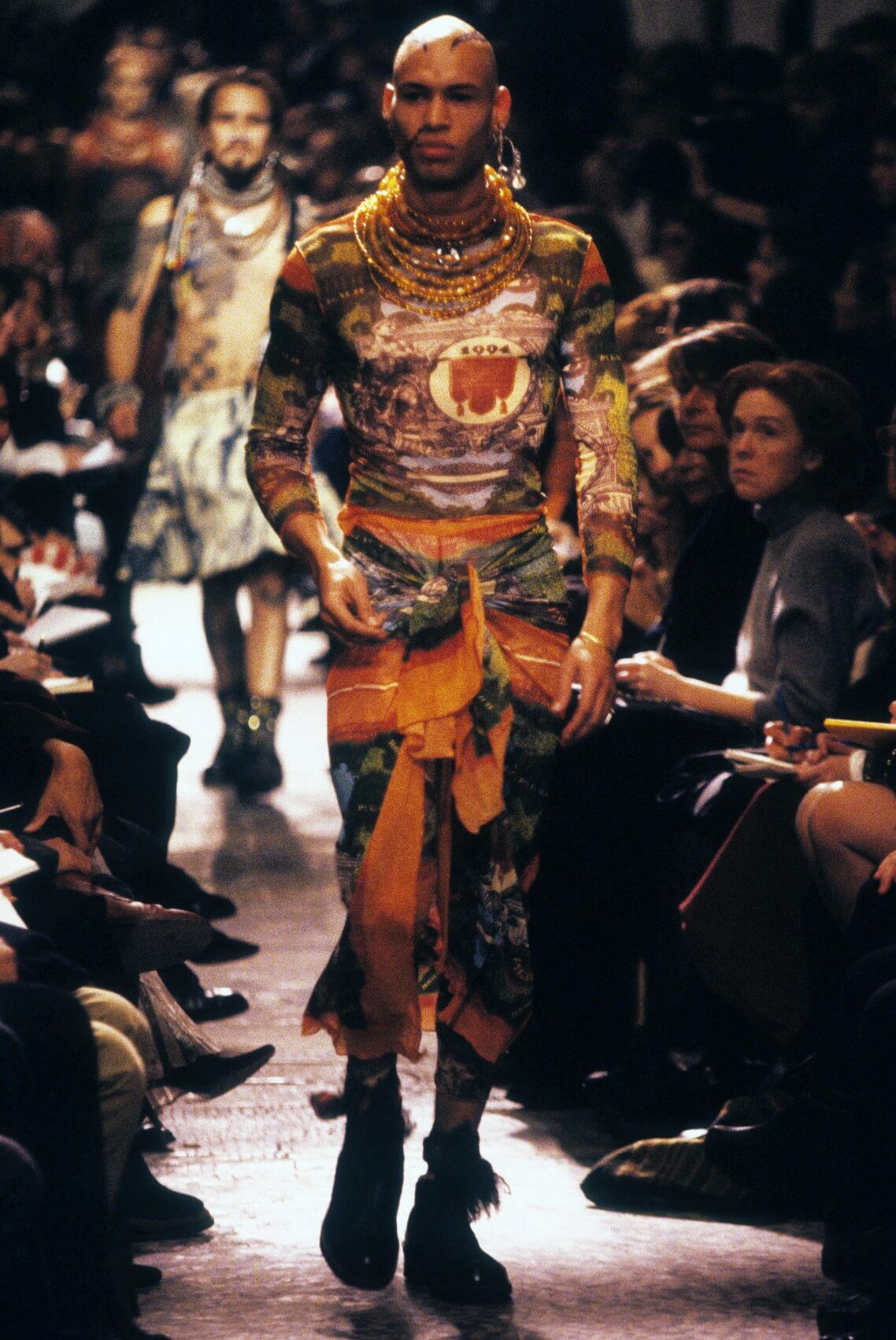 Tattoo art has a history on the runway that blurs the medium between skin and clothing. Jean Paul Gaultier’s Spring 1994 collection, titled “Les Tatouages”, is a celebration of tattoos and body modification expressed through skin and dress. Garments appear semi-psychedelic with Buddhist inspiration, then veer into sailor-motifs with snakes and anchors. The art is boldly multicultural, merging patterns from India and Europe. Beads and rings adorn necks and faces, and some outfits mimic actual skin. Gaultier peppers pants and sheer coverings with designs ranging from graffiti to scorpions. Jean Paul highlights the importance of tattoos in culture, and shows how it can bleed into the style of clothing. 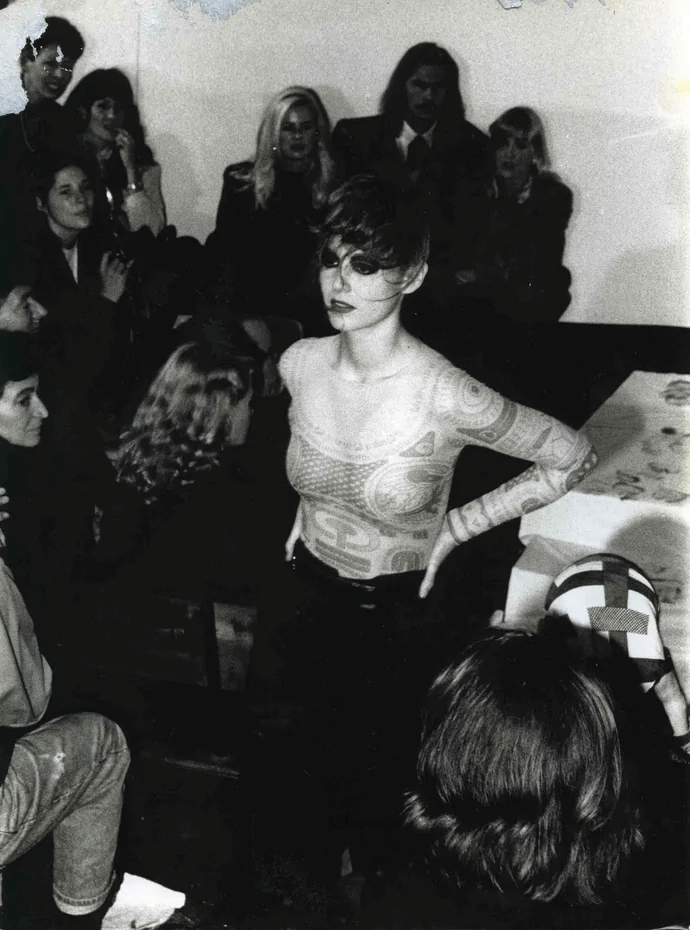 Martin Margiela may have been the first to celebrate tattoos in couture when he sent Graça Fisher down the runway with a tribal tattoo top in 1989. Twenty-five years after that collection, Maison Margiela revisited tattoos in their Spring 2014 Menswear Collection. Maison Margiela mashed together proper suiting and casual particulars. We find deconstructed suit parts and dress shirts accompanied by leather pants and open-tongued boots. Unbuttoned shirts reveal ink you might find in street art, and arms display colorful blocks and crudely scrawled words. On a bicep is a heart surrounding the word “Mom”, another tattoo looks like a band bracelet drawn with a pen. One suit jacket’s sleeves are replaced with tattooed arms–a Native American eagle tattoo on one and a scaled armband with a monkey’s head on the other. If Les Tatouages was a seamless marriage between apparel and body art across the world, Maison Margiela’s 2014 collection showed how tattoos can be used in fashion to create aggressive conflict in style. Their work demonstrates that through complement and contrast tattoos are an essential fabric to the art of fashion. 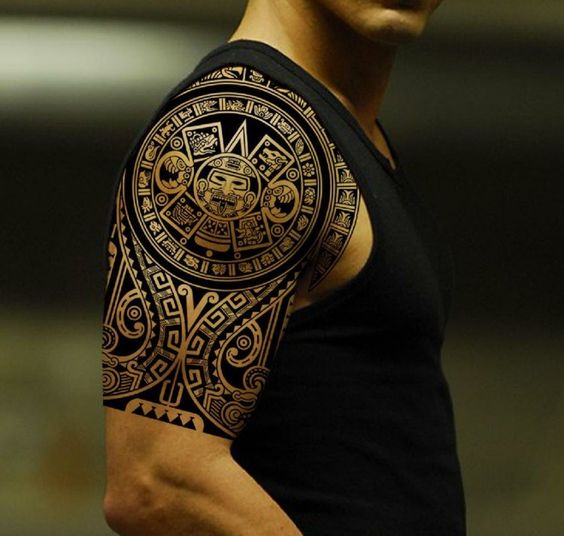 In the 20th century tattoos were associated with pride in one’s soldier regiment, the flowers of the counterculture, and the marks of gang affiliation. Looking beyond this recent past we meet Ötzi the Iceman, a 5000-year-old mummy found with inked skin. H.G. Wells said that “in all ages, far back into prehistory, we find human beings have painted and adorned themselves” and Charles Darwin continues this thought, writing “not one great country can be named, from the polar regions in the north to New Zealand in the south, in which the aborigines do not tattoo themselves.” The marriage of skin and ink is not strange. No, it is as universally human as the smile and the war implement; as original an expression of creativity and identity as pottery and music. It is only natural, then, that we see this art in all aspects of life and fashion.